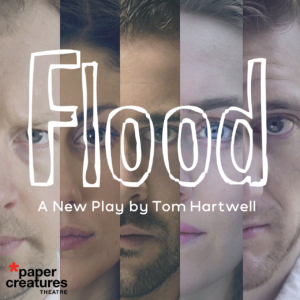 So what does it take to start a theatre company and produce your first play? Easy right? Wrong!

Enter the world of the bold, new and exciting theatre company, Paper Creatures Theatre, to see what it really takes.

‘Today was a long day. It consisted of us slogging away for hours at our laptops doing menial tasks: sending emails, copying, pasting and editing. To many, it could easily seem like a mind numbing part time job at an HR company, which most of us creative types have at some point done to get by.

In actuality, we are two chaps in our mid-twenties, who you have potentially seen in The National Theatre lobby abusing the free wifi, and now we’re preparing for the debut of our production Flood, produced by our newly established theatre company, Paper Creatures Theatre, which comes to the Tristan Bates Theatre this July. This is a huge milestone for both of us as co-founders and as individual artists.

Having a theatre company and being able to produce your own work on your own terms is incredibly rewarding, but also hard work. Yes, you’re seeing a creative baby flourish from start to finish, meeting and working with wonderful people along the way, but it also means sacrificing a bit too.

We are by no means pros! Especially when comparing ourselves to our piers in the field such as: Falling Pennies, Flux Theatre and Matchstick Theatre who we have seeked guidance and inspiration from on our journey thus far.

So far we have learnt two things that have helped, and might help you, if you may be so inclined to take this unique road of self-employment.

Firstly, there needs to be a strong “Why?”. Why do you want to put in all these hours it takes to set up a theatre company and put on a play? We were lucky to have one mentor in particular challenge us strongly on this. Were we doing it just to fill in the gaps in between acting gigs? Or did we have something we wanted to say and stamp on the theatre world? Any answer is fine, but it has to be motivating enough. For us, it eventually revealed itself: having seen so much theatre together after meeting on a Shakespeare tour last summer, we noticed a lack of honest voices for the millennial generation. There were plenty of early 20 year olds on their phones, sassy and disconnected, but where was the deeper meaning and feelings we as millennials experience every day: the grief, the bliss, the heartbreak, the joy? That became our why: to tell simple, bold, compelling stories that hold up a mirror to the millennial generation. Once you find yours, write (or type) it somewhere and hold on to it.

The second thing we’ve discovered that has helped us is the simplicity of being “on it”. When you have those emails to send, send them. When you need to make that call, heed Shia LeBeouf’s (Or Nike’s) advice and “just do it”. You’re confused, and need advice? Ask for it. Good organisation leads to many things. If you schedule meetings promptly, arrive punctually, talk from a well prepared stance, you will in turn gain a good reputation, which leads to working with really fantastic people all over the shop. Of course, sometimes things may fall by the wayside and mistakes will inevitably happen; but keep endeavoring to be on top of things.

Since production began five months ago, we’ve had moments of feeling almost too organized, but with rehearsals coming up and both of us acting in the show, we are then able to delve into our creative side of the work, as performers knowing most of the administrative work is covered. We hope!

Many people ask us; So what happens after ‘Flood’? What’s next for the company? In all honesty, we haven’t yet written up our ‘ten year plan’. And thats ok! Knowledge and experience are powerful things, it’s something we are always gaining as human beings. So essentially our ‘plan’ is to:

•       Keep adding to this list of things we’ve learnt already. It’s a marathon, not a sprint.

As for the rest, We’ll get back to you.

Don’t forget to check out our show Flood playing at the Tristan Bates Theatre,

Special group rate offer £10 tickets for 4 or more tickets booked in a single transaction via phone or in person.

Written by Jon and Nathan

Edited by Stephanie Yamson for The Ascend Actors Group