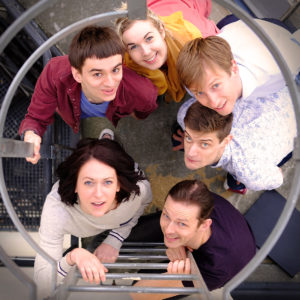 I have frequently joked I could have been cast as a student on Glee and stayed with the series long into my thirties. Not that I would WANT to, but I could because, ironically, for a creative industry, casting calls aren’t very imaginative. When talent is what should matter, a greater focus is instead placed upon our appearance. So, as I am relatively short, baby-faced, and can pass as a teen, I will primarily be cast as such.

Indeed, at a regular script workshop I used to attend, in nine table reads out of ten, I would be asked to be tweens and young adults. Admittedly that was partly due to me being one of the youngest members of the group, but even within the limited range of characters I was asked to play, they tended to largely fall into a stock type: the endearing idiot.

Don’t get me wrong – I like being the endearing idiot. I am good at it. I have been paid to play that character. It is a fun part. The audience loves you and your lines always get laughs. But sometimes I want to get to portray a charismatic leader, a hammy villain, a wizard.

Fortunately, I have found the perfect medium where I can tackle these parts: improv comedy. While I could write or collaborate on projects in which I take on my dream roles, these could take months to come to fruition. In an improv show, I can decide to play an alien, and then fulfill that desire immediately.

That is, why I am incredibly excited about my improv team’s forthcoming Camden Fringe show, The Parentheticals: Improdyssey. This comedy hour culminates in a fully improvised epic quest. For thirty minutes, freed from the whim of scripts and casting calls, each of us has a chance to be the lead.

Regardless of whether our adventure features an ordinary person searching for a spanner or a wheezy goblin seeking an emerald cauldron, we can dictate our roles. We can play outside our age range, gender, or even species. We can show-off accents or sing. Our shortest members can be giants and our tallest can be chipmunks. We will have total freedom to be whatever we want because in improv, you are your own casting director.

So, come see our show. I will probably play an endearing idiot in it, but this time may also be a wizard.