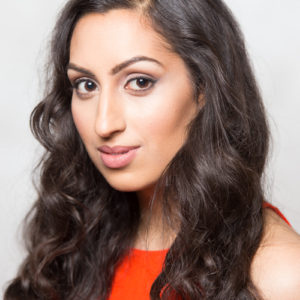 I went to a school called City of London School for Girls, a school where I felt I could become anything I wanted, and in my early teens, I auditioned to be part of our school play, Grease.

I wanted the role of Sandy – as I imagine most girls did. I had a ‘no one puts baby in the corner’ attitude since a young age, whether I was a mere horse in a ballet performance or a shepherd at Christmas, I always tried to be center stage. I don’t believe it was an attention thing, because I take great pleasure in performing alone in a room. I think it is because I truly felt I belonged there.

I did not get the role of Sandy, and at the time, I could not understand why. Instead I was offered the role of Cha-Cha; which made perfect sense given my love for dancing, my ethnicity and hair. But to me it was a rejection. Many years on I have realized, I will never play the blonde blue-eyed woman, it is physically impossible. Those roles are not designed for me and I have accepted that, however searching for those that are, is a neoteric challenge.

Last year, my co-star and I decided to act in a play for the Tamasha Festival in New York, a festival which gives South Asians artists a platform to express themselves and perform. Shez Sardar and I went to the famous Drama Bookstore in Manhattan in search for a play. Although I enjoyed many of the plays I read whilst there, I could not see any casting director ever choosing me for these roles. Shez was not a Caucasian Catholic Tommy, and I wasn’t an ‘all American’ Katie. We browsed the international section, which was all of fourteen books or so, and much to my dismay there was nothing current for actors of ethnicity and in our generation.

Never to be one disheartened, I briskly walked home and decided, if no one had written a role for me, I would write a role for myself and for others. Thus, began a five-day all night ordeal of playwrighting so that Borders in a Bedroom could be submitted in time for the festival.

Borders in a Bedroom won three awards at the festival in New York, Outstanding Playwright, Outstanding Production of a Play and Outstanding Male Actor (my co-star) and will be running at the Camden Fringe Festival this August in London. Although I am deeply humbled by how far we have come, it truly is because I had a multi ethnic, multi-cultural and worldly team. Between a team of five we had at least four religions and four different countries of origin. This is important because this is the world in which we live in. For those of us who were born or raised in the West, we are a melting pot of creative consciousness, and our stage should mirror our audience to be a true reflection of a diverse society. In addition to that, I feel that in the kind of political climate we are in, as an actor and writer, it is my duty to break down social barriers and prejudices that are born out of ignorance. Artists are always at the forefront of change, I see us as the flag bearers of truth, who are willing to put our reputations on the line to shed light on what people may be thinking and feeling beneath the surface – this is acting.

I never realized I was a ‘brown person’ till I came to New York. Having been born in Central London, I was lucky to never have experienced any kind of discrimination. However, I am tired of the segregation where South Asian artists mainly perform for South Asians, and anything mainstream rarely has a South Asian in sight. There is no reason why a Superhero in a Marvel series can’t be any race and it irks me that we haven’t reached a stage where that is truly possible. I am truly fatigued that South Asians are depicted as either ‘Bollywood’, comedians, terrorists or perceived through some arranged marriage cliché love story.

Therefore, I wrote Borders in a Bedroom, because it’s a story about a British Hindu girl and an American Muslim boy. You have so many different identities there, British, Indian, Pakistani, American, Hindu and Muslim – and that is truly what life is like today. The media portrays news in a format that can at times reinforce stereotypes and I think as an artist it is my job to do the reverse.