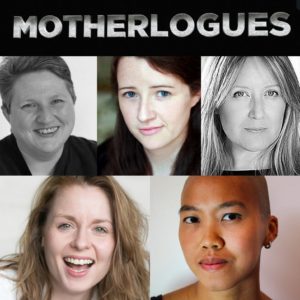 There’s a moment, in the sweat-soaked delirium of giving birth, when you really want to pack up your shit and get the hell out of there. The pain and the humiliation and the being naked in front of everyone just gets old and you think you’d quite like to leave, actually. You crouch there, in a mess of bodily fluids, and you have to face the fact that the only way out of this is through it.

Becoming a single parent felt much the same. Ten years after leaving drama school, with three kids aged six and under, my life had veered fairly sharply off my intended track of acting and writing. (Mainly I was an expert in the nuances of finger-painting and the quagmire of answering the Big Questions from a four year old – ‘But I’LL never die, will I Mummy?’ ‘Well, actually darling….’ Cue hysterics.) We no longer practice confinement, where women in late pregnancy were shut up in a darkened room, the better to avoid the dangers of fresh air, sunlight and social interaction. But like a stir-crazy Tudor lady, in the early years of motherhood, I wanted to crack a window and press my nose to the breeze to catch a whiff of the outside world.

There were cultural events going on around me, but they may as well have been on the moon. I knew I was lucky to get the voice work that came my way and still be able to be there for my kids. (We’ll gloss over the stress of waking up to a vomiting child, or the call from nursery announcing that your child is displaying signs of chickenpox, when you have a studio booked and no childcare). However, it’s hard to see your contemporaries going from strength to strength, storming the National or conquering Hollywood, and not feel isolated sometimes, when all you have to talk to is a microphone, before going home to arrange fruit salad into amusingly pareidoliac shapes.

Eventually the endless stress caught up with me, and my body gave out. I could barely lift groceries, never mind my toddler. Going upstairs was something I did on my hands and knees, with a rest stop half way up. With a permanently inflamed throat, constant headache and aching joints, I would lie on the kitchen floor after switching the kettle on, unable to stand up while it boiled. I had no energy to write or pursue even an intermittent acting career; but I could still feel stories and characters burning under my skin.

And then my kids grew up and became independent, which happens – as John Green so memorably describes falling asleep, and falling in love – slowly, then all at once. I watched parents with younger children usurp my seasonal joys – the spring rambles through the park, the cordite thrill of Bonfire Night  –  feeling physical grief. I had set aside my career to bring up my children, and now, quite rightly, they were moving on. Just as in labour, I had to learn to breathe through the pain and trust it would take me forward.

Feeling weak and exhausted and somehow newborn, I signed up for a local writing course, hoping for, at best, a few pleasant evenings. But once I started, with a shock of recognition, I felt the creative surge that, like a wave, has to be ridden. And it’s washed me ashore in what feels like a new world.

A scratch night asked me to extend my first short play to an hour. I spent a mad ten days up in Manchester last month directing a wonderful, bonkers show that was nominated for two awards, and I’m about to perform in Motherlogues at the Camden Fringe. I didn’t hustle for any of this, yet by some forward momentum I don’t fully understand, this year has been full of miraculous, creative joy.

And the kids – virtually self sufficient as they are – have been magnificently proud and supportive. (The youngest is downstairs right now, making pasta pomodoro for dinner so I can write this). There’s no longer the constant guilt in my head about short-changing them – if anything, I know it’s good for them to see me fulfilled and happy. I’m secure enough in who I am, now, to bring that fully into my work. And would I have got here without the fallow years?

I used to be fearful. I wanted to do a lot of things but I feared failure, or judgement, or penury. I kept myself small in order not to draw attention, and then berated myself for my lack of courage. But being patient with my kids taught me to be gentle with myself. Encouraging them to try new things made me braver. And enjoying their lopsided attempts at baking or sculpture, or their idiosyncratic dress sense (why yes my daughter DID wear an outfit made out of curtains and watch the Sound of Music every day for a solid year) reminded me that joy is more important than perfection.

There’s something about having spent a week by my daughter’s bedside as she had a bone tumour removed that puts a last-minute prop sourcing crisis into perspective. Navigating thirteen years as a single parent makes directing a play seem like a cakewalk. Write thirty-eight pages of dialogue in a day? Well, no-one needs their bottom wiping or to be picked up from school – I have acres of time! Devise a show in five days with a roomful of strangers – that sounds doable! Direct a show to be performed in pitch darkness with only three days rehearsal? BRING IT ON.

Because life goes by so goddamn fast and, really, what’s the worst that can happen? I might bore some people. Or disappoint them. I might feel humiliated, or exposed, or so badly bruised I have to take a Valium and lie down in a darkened room for two days. So what? I might – with this project, or the next – inspire someone, or comfort them, reassure or delight.

I no longer care very much about a ‘career trajectory’ or about pursuing ‘success.’ It’s enough of a success to be doing anything creative, and not only for money; making something, anything that brings you joy or peace is enough – a beautiful meal, a new friendship, a freshly made bed. But to be engaged with others, shaping something together, wresting some beauty and laughter and meaning out of the day – that is everything. I did it with my children, and now I’m doing it in a rehearsal room. I finally get why E.M. Forster wrote, ‘Only connect’. It’s why Adam stretches out his hand to the Almighty in the Sistine Chapel – because that spark, leaping from one being to another, is what gives us life.

So here’s to creativity, whatever it is you’re making – a poem, a play, a symphony, a relationship, a child. Here’s to reaching out to each other in all our hurt and fear and joy. Here’s to trying, and failing and trying again. Here’s to making the shining best of our brief moments on this planet – to keeping each other safe, and comforted, and inspired. Here’s to compassion, to courage, to creating new things in blood, sweat and tears. Here’s to all our messy, miraculous labours of love.

See MOTHERLOGUES opens at The Etcetera Theatre on Wednesday 23rd August until Sunday 27th August at 18:30.
Tickets are £12.50 (£10 concs) and all booking information can be found on the Camden Fringe webpage here.
Written by Colleen Prendergast