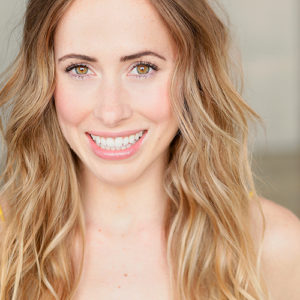 I moved to Los Angeles when I was 22 years-old. I just spent four years getting my BFA in Musical Theatre from the University of Miami, Florida and I had to choose between pursuing theatre in New York or film/TV in LA. Not an easy decision because I truly loved both. My major was theatre focused so I was intrigued to try something new. And now that I have been in LA for a while, I miss live theatre and a live audience more than anything.

I was raised in Australia and I knew from an early age that I wanted to study Musical Theatre at one of the ‘U’s’ – ‘K’ or ‘S’. At the end of the day, I chose an American University because I didn’t want to limit my education strictly to conservatory training. I loved school. I am so happy I chose Miami. I had opportunities there that I never would’ve gotten at any other University.

In our final year of school our class of 14 students did showcases in both New York and LA. If an agent, manager or casting director was interested in you, they asked for a ‘general’ meeting. I decided to go with an older ‘experienced’ manager in LA (think Estelle, Joey Tribbiani’s agent in ‘Friends’)… once I realized that she didn’t own a computer therefore couldn’t receive online breakdowns from casting agents and electronically submit me for roles I knew I hadn’t found the right match. If you aren’t in the Union (SAG/AFTRA) and you aren’t represented by an agent or manager life as an actor in LA is significantly more difficult. As soon as I moved out there a friend and I wrote and produced a web series to get into the Union. I also did months of ‘extra’ work and production assistant work because I wanted to be on set. It is definitely one the least glamorous jobs in the industry however that is where I learned the ins and outs of the entertainment business.

After five years of hundreds of casting director workshops, endless headshot photo shoots and questionable pay day jobs I was lucky enough to be working, just not as regularly as I wanted – in other words I was an actor. I realized that in order to perform more often, then I have to create that opportunity for myself. In this industry, if you sit back and wait for your ‘team’ to provide you with the opportunities then you might be waiting around for a while. I can’t believe it took me this long to make a change. The Camden Fringe will be the start of something exciting.

Out of the blue, during one of my restless ‘I-am-not-doing-what-I-want-to-do-in-life’ moments my insane-ly talented cousin Imogen Dall who lives in London told me that she wanted to write a comedy piece and if I would have any interest in performing it. Boy, did I. We researched festivals in Europe and the Camden Fringe fit in perfectly with everyone’s schedule. But we had missed the application deadline by months. I reached out to Michelle and Zena who run the festival and told them that I was dying to be involved. They were so sweet and didn’t let me die. Then began the real work. I emailed all of the venues, locked in dates and times, reviewed endless drafts of the script, figured out how to rent a keyboard amp etc in the UK, contacted any and all press outlets, booked accommodation, booked flights and made it happen. I contacted one of my old professors from Miami, David Williams and told him about the show, drugged him and forced him to participate. So I have been rehearsing in Miami for the past week and head to London three days before our first performance. Tanned.

Lesson: if you want it badly, go and get it badly.

Hope to see you at my show! Details below.